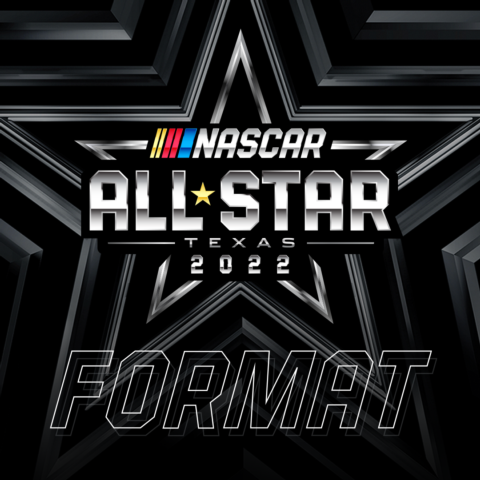 NASCAR and Texas Motor Speedway today announced the format and eligibility for the NASCAR All-Star Race on Sunday, May 22, that features four stages and 125 laps of on-track competition for a $1 million payday, stage winner incentives, amplified roles for the pit crews, and a distinctive head-to-head elimination qualifying format.

The NASCAR All-Star Race returns to Texas Motor Speedway for the second consecutive season and this 38th edition brings some unique twists for the eligible Cup drivers pursuing the winner-take-all $1 million payday. The most prominent twist will come in the form of a four-round qualifying format with head-to-head elimination rounds and the pivotal role of the pit crews.

The race will consist of four stages, with the first three 25 laps in length and the fourth and final being a 50-lap shootout for the $1 million prize. The new format has provided a major incentive to win any of the opening three stages or the pit stop competition during the break between Stages 2 and 3.

Stage 2 (25 laps): Stage 2 winner starts second in final stage as long as he finishes 15th or better in Stage 3.

Special Stage Break (Pit Stop Competition): Each team must pit and perform a four-tire stop. The team with the shortest time on pit road (pit in/pit out) wins the pit crew award and the driver will start fourth in the final stage as long as he finishes 15th or better in Stage 3.

Stage 4 (50 laps): Stage 1 winner starts first, Stage 2 winner second, Stage 3 winner third and pit stop competition winner fourth. If a “natural” caution occurs between laps 15-25 of the final stage, standard race procedures will be in effect. If no “natural” caution occurs during that time, NASCAR will call an “All Star” competition caution. Winner of the Stage 4 earns $1 million.

“The NASCAR All-Star Race highlights our best athletes -- from the driver to road crew to the pit crews -- and this year’s edition brings that to another level,” said Scott Miller, NASCAR Sr. Vice President, Competition. “Fans will have a full weekend of exciting competition starting with a unique qualifying format and an All-Star Race that features the top talent in our sport.”

“The incredible intensity of the drivers and teams as well as the Texas-sized excitement from our race fans is what makes the NASCAR All-Star Race just that much more special,” Texas Motor Speedway General Manager Rob Ramage said. “The never-seen-before qualifying format will put even more pressure on drivers and pits crews to perform at their peak. Combining that with the easier-to-follow race format will create more action-packed competition for race fans at Texas Motor Speedway and those watching on FS1 as they watch their favorite drivers battle to earn a $1 million payday.”

Drivers eligible for the NASCAR All-Star Race consist of:

Tickets for the May 20-22 NASCAR All-Star Race Weekend, including the Blake Shelton concert, are on sale now at https://www.texasmotorspeedway.com/events/season-tickets/.

Keep track of all of Texas Motor Speedway’s busy schedule by following on Facebook, Twitter and Instagram. Keep up with all the latest news and information on the speedway website and TMS mobile app.