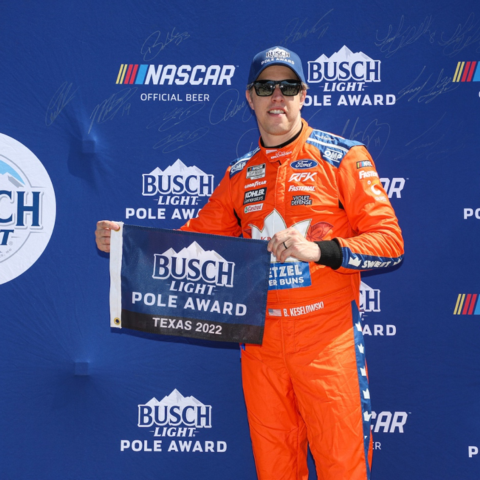 Keselowski, driver of the No. 6 Ford, recorded a top lap of 188.990 miles per hour (28.573 seconds) in the final round of qualifying to secure his first pole since Richmond 109 starts ago and his inaugural one with RFK Racing. The pole was the 18th of his career and second at Texas, with his other coming in this fall race in 2015.

“That was a heckuva lap,” said Keselowski. “This is a tough track to qualify at because the speeds are so high and the track is so slick and hot. We were able to put a lap together. (Turns) Three and four was one of those gutsy laps where you hold it wide open through there and hope it sticks. It was really close but we made it through. That was probably the difference maker.

“It is a super exciting time for me and for our company here at RFK with a lot of the progress we have made over the last few months and now it is actually starting to show up. It has been a painful journey, but a good one.

Playoff drivers Austin Cindric and Ross Chastain were just outside the top-10 qualifiers, earning the 11th and 12th starting positions, respectively, while Ryan Blaney was 14th. The bottom three qualifiers among the playoff drivers were Alex Bowman (17th), Christopher Bell (22nd) and Chase Briscoe (30th) among the 36-car field.