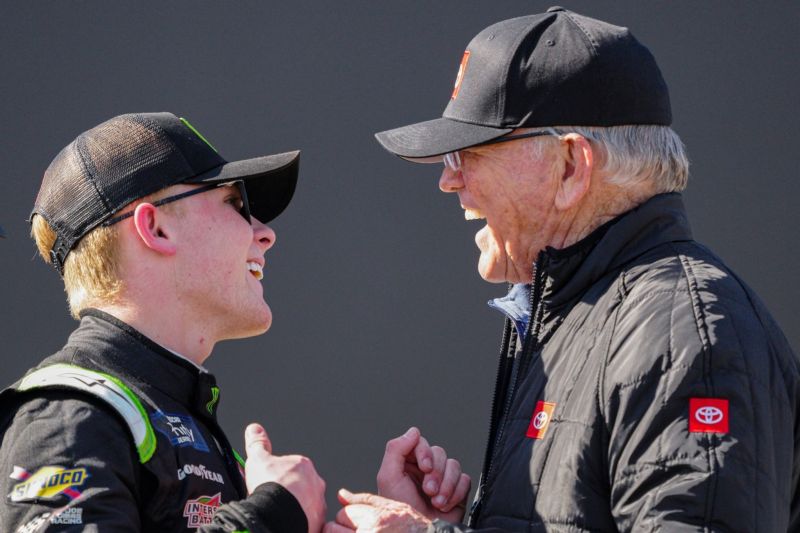 Ty Gibbs, the 19-year-old grandson of Pro Football Hall of Fame coach and NASCAR Hall of Famer Joe Gibbs, already owns a burgeoning resume in the NASCAR Xfinity Series but next week he begins to focus his attention on a family tradition.

Championships are the name of the game in the Gibbs family and the budding star will be among the prime title favorites as the NASCAR Xfinity Series Playoffs officially open with next Saturday’s Andy’s Frozen Custard 300 at Texas Motor Speedway (2:30 p.m. CT, TV: USA Network Radio: SiriusXM Radio Ch. 90, PRN).

His legendary grandfather has won five Cup Series championships (2000, ‘02, ‘05, ‘15, ‘19), three Super Bowls (XVII, XXII, XXVI) and three Xfinity Series titles (2009, ’16, ’21) in his illustrious career while Ty begins the pursuit of his first of what could be many championship runs in NASCAR’s National Series. His strategy for this playoff run is succinct.

“Winning is the obvious answer,” Gibbs said. “If you win, you advance. And that’s the key.”

Gibbs, driver of the No. 54 Interstate Batteries Toyota for Joe Gibbs Racing, currently is tied for the series lead in victories (5) with Noah Gragson of JR Motorsports and the two also are battling it out for the No. 1 playoff seed. It will come down to Friday night’s regular-season finale at Bristol Motor Speedway, which will determine the 12-driver playoff field and the seedings.

Gibbs already is assured a playoff berth regardless of his finish, but a win or dominant performance at Bristol could give him the top seed. He also has a remote chance at the regular-season title but will need a poor outing from leader AJ Allmendinger, who holds a commanding 38-point leader over Gibbs with a maximum 60 points available at Bristol.

“We’ve had a good year thus far and I’ve learned a lot,” said Gibbs, the 2021 Xfinity Series rookie of the year. “We’ve won five races but as a competitor you always want more, and I think there are a few more we should have. But overall it’s been a good season and I’ve learned a lot. It’s great working with Chris Gayle (crew chief) and everyone on the 54 and at JGR.”

The elimination-style NASCAR Playoffs is as much about winning as it is survival. A victory in a round automatically advances the driver to the next round but a major mistake in the three-race round format also could be devastating. So will the aggressive Gibbs remain in that attack mode or look to become a bit more conservative?

“Not really, to be honest,” Gibbs said. “The goal is to win races and when you win, you advance. But, if you don’t have a winning car, you want to finish as best you can and not put yourself in the bad spot. It’s just about getting good finishes.”

The Xfinity Series Playoffs opener will be just his second appearance at Texas Motor Speedway. He made his TMS debut in May, when he started seventh and finished 12th.

“Texas is a fun track, and it is an important race to us as Interstate Batteries is based just down the road,” Gibbs said. “So we want to do well for them. It’s a challenging track, but JGR won there twice last year so hopefully we can do it again.”

He also is expected to compete in next Sunday’s NASCAR Cup Series Autotrader EchoPark Automotive 500 race at Texas Motor Speedway. The addition of the Cup Series to his schedule was a result of 23XI Racing driver Kurt Busch being sidelined due to a head injury he sustained from a crash at Pocono in July. Bubba Wallace has moved over to Busch’s No. 45 Toyota and Gibbs is in Wallace’s No. 23 entry.

The double duty may be valuable to Gibbs on the Xfinity Series side of the equation as it does grant him more overall track time on the 1.5-mile oval in which he only has seen once.

“Any track time is good,” said Gibbs, who will be making his ninth Cup start of the season at Bristol on Saturday night. “Just making laps in a competitive environment helps. I’m learning a lot each week and Billy Scott (crew chief) is helping me as is everyone at 23XI.”

It would appear that the opening-round races would play in Gibbs’ favor given his success on those type of tracks.

“Yes and no,” Gibbs said. “Talladega is a wild card, but it does help that it’s the ROVAL and a 1.5-mile oval. At the end of the day, it’s all about winning or putting yourself in the best possible position each week to advance to the next round.”

The Round of 8 will follow and consist of Las Vegas (Oct. 15), Homestead-Miami (Oct. 22) and Martinsville (Oct. 29). That round will determine which four drivers will battle for the title at Phoenix on Nov. 5.