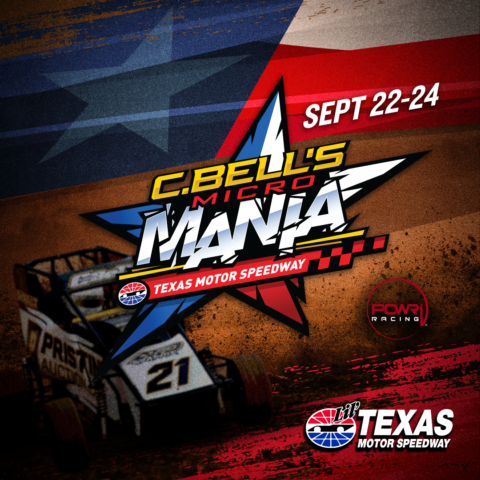 The number of NASCAR champions competing in the inaugural C. Bell’s Micro Mania has increased from two to six for the Sept. 21-24 races at the 1/5-mile Li’l Texas Motor Speedway dirt oval.

They will join NASCAR Cup Series driver Christopher Bell (2017 NASCAR Camping World Truck Series Champion and namesake of the event), two-time NASCAR Cup Series Champion Kyle Busch (and son Brexton Busch), along with a full field of entrants in the four-day event that is a lead-in for the Autotrader EchoPark Automotive 500 NASCAR Playoffs weekend at Texas Motor Speedway.

C. Bell’s Micro Mania begins with a full day of practice on Wednesday, Sept. 21, with qualifying races both Thursday and Friday (Sept. 22-23). Saturday evening’s schedule will consist of mains in both the Outlaw and Junior Sprint classes with the $10,000-to-win Outlaw A-main highlighting a total event purse of $50,440.

Micro sprints are smaller versions of full-sized non-wing sprint cars with side-mounted 640cc motorcycle engines that can generate 140 horsepower with similar chassis and body styles to the larger versions. Competition will take place in both the Outlaw and Junior Sprint classes.

Renovations to the 1/5-mile track began immediately after the NASCAR All-Star Race weekend in May. First, the asphalt was removed and replaced with a clay surface. There is progressive banking in the corners, at three degrees on the bottom and 12 degrees on top. There is also five degrees of banking on both straightaways.