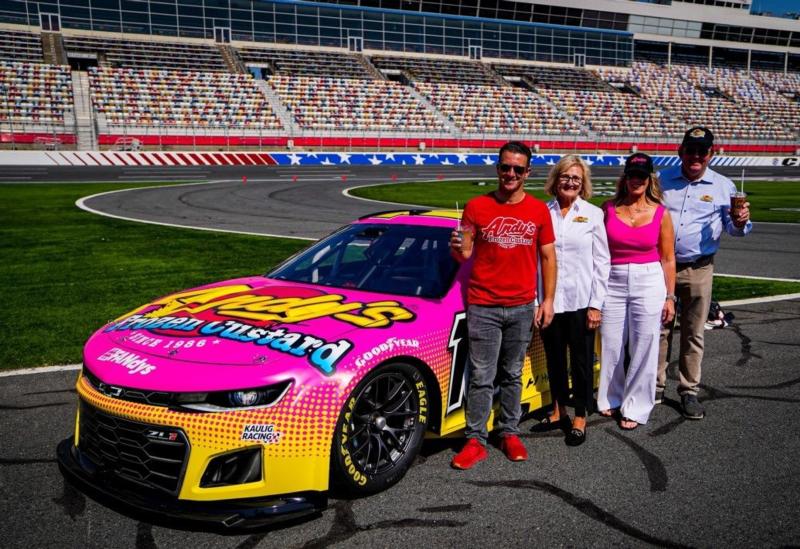 Kaulig Racing and Andy’s Frozen Custard® have announced a renewed partnership for the 2022 NASCAR Cup Series (NCS) and NASCAR Xfinity Series (NXS) season, beginning with the NASCAR All-Star race at Texas Motor Speedway on May 22 at 8 p.m. ET.

To kick off their 2022 partnership, AJ Allmendinger’s No. 16 Camaro ZL1 for the All-Star race will have a colorful paint scheme featuring the Andy’s™ logo.  As an added bonus for race fans everywhere, a new, limited-time All-Star Jackhammer™ will be offered at all Andy’s locations, beginning May 3rd.  Already a winner, the All-Star Jackhammer features creamy chocolate frozen custard blended with Oreo® and peanut butter, then drilled and filled with marshmallow crème.

“It means so much to our family, as lifelong motorsports fans, to be supporting NASCAR via our partnership with AJ and Kaulig Racing,” Andy Kuntz, CEO and Owner of Andy’s Frozen Custard, said.  “Andy’s brand hallmarks – quality, constant innovation, a commitment to family and community and speedy service -- align well with a motorsports partnership.”

In addition to the All-Star race, Andy’s will also act as the primary partner on Kaulig Racing’s No. 16 Chevrolet and race entitlement sponsor at the Andy’s Frozen Custard 300 at Texas Motor Speedway on September 24 for the NXS race. Andy’s will also bring back the AJ AlmondDinger treat for a limited time.

“I’m excited to have Andy’s Frozen Custard back with us for a second-straight year,” said Allmendinger. “Having them onboard our No. 16 Chevrolet last year, as well as having a flavor of custard named after me, was awesome. Now being able to do it again this year for the All-Star race makes this relationship even more special.”

Last year in only its first, limited schedule NCS season, Kaulig Racing won the Verizon 250 at The Brickyard at Indianapolis Motor Speedway with Allmendinger, making them eligible to compete in this year’s All-Star race.

“We’re pumped to be able to compete in the NASCAR All-Star race in just our first, full season in the Cup Series,” said Kaulig Racing team owner, Matt Kaulig. “Winning a Cup race as a young team and being eligible for the All-Star race is truly an honor and having Andy’s team up with us for this race makes it even more special.”

Kaulig Racing and Andy’s partnership will kick off at the NASCAR All-Star Race at Texas Motor Speedway on May 22 and conclude at the Andy’s Frozen Custard 300 on September 24.

About Andy’s Frozen Custard
Founded in 1986 in Osage Beach, MO by Andy’s parents John and Carol Kuntz, Andy’s Frozen Custard has been providing the freshest frozen custard in the business for 36 years, giving ice cream the “cold shoulder” by scooping, mixing and presenting handcrafted frozen custard treats with speed and a smile.  Since the beginning, the family has had one dream: to share what makes them happiest with everyone else, and to warm hearts, one scoop of frozen custard at a time.  With a focus on product quality, customer service and community involvement, Andy’s has grown into the nation’s largest frozen custard-only business, with more than 2,000 employees and 109 company-owned and franchised stores across 14 states proudly serving the World’s Finest Frozen Custard.  Andy’s also offers the ‘Yum Squad Loyalty Club,’ designed to say “thank you” to loyal customers by earning points to redeem towards a free treat for every dollar spent. For more information or for details about franchising opportunities, visit www.eatandys.com.

About Kaulig Racing™
Kaulig Racing™ is a full-time multi-car NASCAR Cup Series (NCS) and NASCAR Xfinity Series (NXS) team, owned by award winning entrepreneur, Matt Kaulig. Established in 2016, Kaulig Racing™ has made the NXS Playoffs consecutively each season since the playoff system started and made the Championship 4 round in both the 2020 and 2021 seasons. They will continue fielding three, full-time NXS entries; the No. 10 Chevrolet driven by Landon Cassill, the No. 11 Chevrolet driven by Daniel Hemric, and the No. 16 Chevrolet driven by AJ Allmendinger. With multiple wins, Kaulig Racing has come to be one of the top competitors on track each weekend. The team made multiple starts in the NCS in 2021 and won in its seventh-ever start with AJ Allmendinger’s victory at “The Brickyard” for the Verizon 200 at Indianapolis Motor Speedway. The young team has acquired two charters for the 2022 NCS season, with Justin Haley competing as its first, full-time driver in the series. The team’s second entry will be shared by part-time teammates AJ Allmendinger, Daniel Hemric and Noah Gragson. To learn more about the team, visit kauligracing.com.