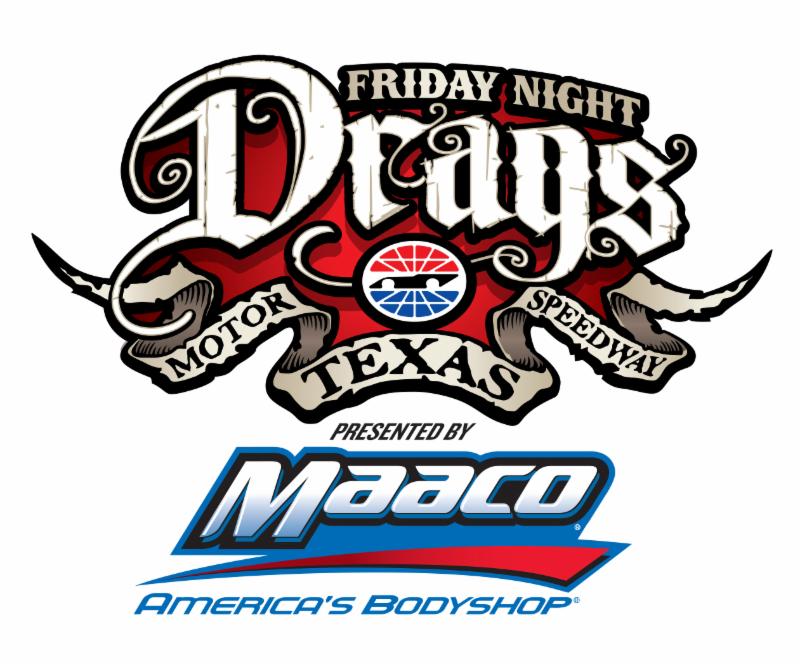 Texas Motor Speedway converts its pit road, which is typically used for NASCAR and INDYCAR events, into a 1/8-mile drag strip for the six-week summer series. Every Friday from June 24 to July 29 drivers from across North Texas will compete for weekly and season-long championships in seven different divisions.
Friday Night Drags presented by Maaco features various divisions based on model and modifications of the vehicles. This year's divisions include Tuner, Street Bandit, Sportsman, Snap-On Tools All-Wheel Drive, American Steel Carports Super Cars, 4 Wheel Parts Black Smoke Warrior and Street Outlaw.
Joining the thrill of high-speed drag racing is the return of the popular Hills Air Support Show-N-Shine. Car enthusiasts display their prized vehicles for the opportunity to be recognized as the best in one of four categories: Best of Show, Best Classic - 1972 or earlier, Best Current Custom - 1973 to current and Best Motorcycle.
Friday Night Drags presented by Maaco will celebrate Independence Day with a Fireworks display on July 1 presented by Snap-On Tools. Competitors and spectators will be treated to a fireworks extravaganza courtesy of Snap-On Tools with the display beginning at approximately 10 p.m.
The gates open each week (June 24, July 1, July 8, July 15, July 22, July 29) at 6 p.m. with inspection, practice and Hills Air Support Show-N-Shine beginning at 6:15 p.m. Drag racing competition gets underway at 9:15 p.m.
The cost is $20 to participate in the drag racing or Hills Air Support Show-N-Shine competition each week. For spectators, general admission grandstand tickets are $10 for adults and $5 for children 12 and under and available at the Gate 6 ticket booth. Parking is free in the PSL lot outside of Gate 6 and available for $20 in the infield (with admission included in the pricing). Coolers are permitted in both the grandstands and infield.
Friday Night Drags presented by Maaco was created in 2009 as a resource for curtailing illegal street racing in the Metroplex by providing a safe alternative at the speedway. According to the National Highway Traffic Safety Administration, traffic crashes are the leading cause of death for people between the ages of 15 and 20 and an average of 135 people die in the United States annually in street racing-related accidents.
For more information and official rules of Friday Night Drags presented by Maaco, please visit www.texasmotorspeedway.com.
About Maaco: Maaco Auto Painting & Collision Repair - a part of the Driven Brands, Inc. family of automotive aftermarket franchise brands based in Charlotte, N.C. - is America's #1 Bodyshop. Maaco provides automotive paint and cosmetic repair services for nearly 500,000 drivers annually. With more than 470 independently owned and operated franchises across the United States and Canada, Maaco has restored the safety and appearance of more than 20 million vehicles over 40+ years. For more information about Maaco in the Dallas/Fort Worth-area, visit www.maaco-dallas-area.com.
Texas Motor Speedway